Tag Rugby Tournament at Lady Seawards 30th September 2019. Westcliff won all 4 games that we played! All our children were fantastic team players and were really well behaved. They did Westcliff proud! 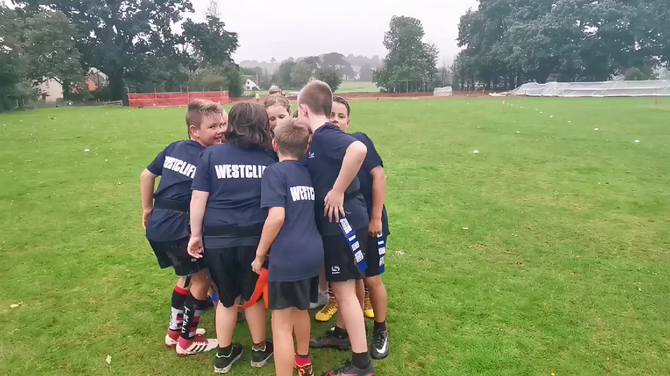 On Tuesday 26th March 2019 a selected group of KS2 children took part in a Multi Skills Festival at Dawlish Leisure Centre.  The session provided an inspirational boost for the children, playing lots of different activities and joining in with other pupils from different schools. They all had a great time with Year 9 and 10 sports leaders from Dawlish College.

On Friday 15th March a team from KS2 took part in a Handball Competition at Dawlish Leisure Centre competing against Kenn, Kenton, Starcross and Cockwood.  Westcliff did really well overall with Unit 2 coming 5th and Unit 3 coming 4th and 1st. They all had a great time.

On a rainy November Sunday, the Westcliff Running Club put on a good show at this year’s Templar Ten fun run. There was a break in the weather for the race – and our competitors put in a brilliant effort, all finishing with great personal times. Riley Payne stormed into third place overall and first in his age category, running an astonishing 6.33 minute/mile pace. Jayden Diplock, Harry McCale and Alexander Andrew were hot on his heels with Freya Pemberton coming in a few seconds later. Our other members rounded that last corner with determination and spectators were treated to many a sprint finish. Everyone received a runner’s medal and a well-deserved mars bar at the finish line! I would like to say well done to every runner – you were all fantastic and ran with such a positive attitude – you are a credit to Westcliff School. Also, thank-you to all the family and friends who came to support their children’s efforts – it makes a huge difference, and it really showed in the results they achieved.

On Monday 1st October the Westcliff Tag Rugby Team were champions at the First Federation Central Hub Six Nations. The pupils were excellent and showcased some stunning performances utilising all of the skills they have worked on over the past couple of years. It was a great day out, we are very proud of the team.

After 5 games played between all the schools the final standings were as follows:

Children from 5 primary schools across the DLP enjoyed a brilliant afternoon of Aesthetic activities on Fri. 26th January.

The activity stations were all led by Year 9 & 10 Sport Leaders from Dawlish Community College. The leaders were so enthusiastic and displayed a great sense of fun and maturity in their approach to the afternoon. This really encouraged all the youngsters to take part and enjoy themselves.

There were 5 activity stations. There were two Gymnastics stations, one exploring shapes and rolling on the floor space and the other exploring shape in the air with some vaulting activities. The Yoga station saw the pupils learn different yoga positions and how to focus their breathing. The two dance stations saw pupils learn a Dance Motif ‘Superhero’ phrase, with the other a creative duet station of their superhero characters.

At the end of the festival, the children all came together to perform their dances all together. It was fantastic to see how well they had all remembered it and was a great end to a delightful afternoon. Well done to the Year 9 & 10 leaders.

A cold dreary January morning was a perfect way to start the second of Dartmoor School Sport Partnership’s Young Play leader conferences – as they were looking at ‘Wet Play’ ideas in one of the workshops.

The Young Play Leaders explored some ideas to increase physical activity at their schools even on a ‘wet play’ day. They played tabletop games of ‘Cup Pong’ (elimination & points scoring versions of the game) and Penny football. They then looked at some of the many interactive websites that you can project in a classroom. Eg. ‘Go Noodle’ and ‘Just Dance’. These ideas were emailed out to the schools for the YPL to learn more about and share at school.

For their second workshop, the pupils developed their confidence in refereeing skills. They worked on voice projection, the use of verbal and non-verbal communication, hand signals etc. They designed small sided games and took turns to referee them.

As well as the two workshops pupils designed and shared mini activities with minimal equipment to show how creative they could be designing activities quickly. This is a massive skill of being a top YPL. There was also time to discuss and share good practice amongst schools.

The event took place on the fields and grass banks around Dawlish Leisure Centre. The race course was set out to make an interesting and challenging course suitable for each age group.

Leaders from Dawlish Community College marshalled the event ensuring all pupils were motivated and stayed on track. A group of the leaders took it in turns to run at the back of each race and helped those who needed that extra bit of encouragement.

The children were a delight all morning displaying sheer grit and determination to keep battling and not giving up. They were also so encouraging to their fellow teammates cheering them on from the sidelines. There were many proud teachers, parents and grandparents – albeit a bit chilly by the end!

A fresh autumn day at Dawlish Leisure Centre was a great start to a wonderful morning of enthusiastic pupils and staff. Five primary schools attended the first of Dartmoor School Sport Partnership’s series of three young Play Leader conferences of this academic year.

On arrival, the children were asked to create a small game with minimal equipment and space. Pupils then shared their ideas bravely in front of each other. Already we could see their creativity and leadership skills on display!

Next, we gave the Young Play Leaders and their staff member time to do a S.W.O.T. analysis about their current active playtimes. S = Strength, W = weaknesses, O = Opportunities, T = Threats. Each of these aspects were really discussed with some fantastic ideas to improve and develop. It was terrific to hear about lots of positive Active playtimes within the DLP. Ideas and suggestions were shared amongst schools. The children and staff were buzzing with next steps to take back to their schools to develop further.

We then explored ‘What qualities make a good leader’ and the qualities in practical activities. All the children were a credit to their schools in terms of attitude, behaviour and enthusiasm. We really hope that the morning gave them and their staff and injection of motivation to go back to their schools and improve the Active Playtime experience!

On October 19th the second High5Netball festival laid on for the Dawlish primary schools by the Dartmoor School Sport Partnership. The festival was aimed at year5/6’s both girls and boys. Kenn, Westcliff and Kenton were the schools that bought squads to the event.

The festival was meant to be on the astroturf at Dawlish Community College, however, due to the great British weather, it had to be moved indoors to the sports hall at the Dawlish Leisure Centre. No hardship at it was a lovely venue.

The festival was aimed at introducing High5Netball rules, tactics and games to year 5 and 6’s, with an emphasis on taking part rather than competition. The 3 primary schools bought large squads and so over the course of the afternoon, all pupils rotated around the 5 positions, giving them a chance to understand how to play each. There was great improvement seen from the first game to the last.

Leaders were provided by Dawlish Community College, who did an amazing job at explaining the rules, positions on the court, providing umpires for each game and organising the timings of the matches.

Many parents and relatives came to watch their children enjoy a fun & active afternoon.

The next High5Netball event will be on Tuesday 28th November 10.00-12.00, on the Dawlish Community College Astro. As pupils have now had a chance to learn about the game, this event will be a competition, with medals to be won. All schools are invited to attend, regardless of whether they attended the festival or not. We look forward to seeing you there.

On Friday 13th October an excitable bunch of Year 3 & 4 pupils from Westcliff Primary Academy and Kenton Primary School joined together for an afternoon of High 5 netball. The session was organised and led by Becky Mason from the Dartmoor School Sport Partnership along with five brilliant Year 8 Sports Leaders from Dawlish Community College.

First, the pupils played some fun warm-up drills before practising and developing their netball skills including correct ‘footwork’, passing, dodging, attacking and defending. After this, the positions and rules of the game were explored and the pupils split into three mixed teams to play lots of mini matches. On every match, the pupils rotated their position on the court so they got the full High 5 experience!

It was fantastic to see how well the pupils worked collaboratively together and how much their skills, knowledge and understanding of the game developed during the afternoon.

Many thanks to Hannah Dempsey, Head of PE at Dawlish Community College for supporting the afternoon with her time, leaders and the astro space.